Namaste EUDEC friends from Europe and beyond!

Here is the promised Report from IDEC 2018:
how it all unwrapped in my very fragmentary and subjective outlook 😉 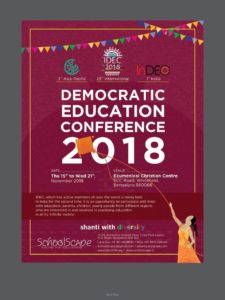 It was simultaneously the 3rd A.P.DEC (ey-pi-dec) conference (= the equivalent of EUDEC for the Asia-Pacific region), and the first, newly born InDEC :
indeed India feels the urge to create a regular nationwide conference, considering the country is a sort of sub (or super?) continent in itself with a population of 1,4Bn : one fifth of the total population of the world. Twice that of Europe at large to the Ural Mountains – & superior to Africa in its whole entirety.

A RESPECTFUL, RELAXED AND LIVELY ATMOSPHERE”

At 1000 meters elevation, Bengalore region is renowned for its mild climate, which made temperatures generally pleasant for everyone.

The conference itself is set in a large protective campus interspersed with lecture halls, lawns, majestic trees, groves and flower thickets.

Welcoming is warm, smiling and caring.

The event is characterized by a huge presence of the youth, which gives a boost of energy and liveliness.

On the sides of the rather classical conferences, music and dance is ubiquitous, sometimes giving a « Bollywood » glamorous touch to the whole event. 🙂

The guiding theme or motto is : shanti (peace) in diversity. There is indeed a colorful gently mixed crowd, including Pakistani Muslims and even Buddhist monks.

Until the end, a certain confusion emanates from schedules and billboards, the food coupon system (instead of the simple wristband system set up in Greece for the EUDEC conference), and a very erratic Wi-Fi connection; but India is particularly expert in organizing chaos. Which creates more collective responsibility; and the kindness and care of the organizing makes up for any bump or pothole.
Generally the event is imbued with the loving, respectful, relaxed and vivid atmosphere you can expect on a Democratic Education event, with that zest of freshness and magical exuberance that characterizes India.
And for as much as it counts…special care has been taken in the food to try to accommodate all palates and offer some diversity : millet as an alternative to daily rice for instance, veggie and non veggie, spicy and…hem!..less spicy  ?? Some people would have liked more western food, but generally the quality and service were deemed high. 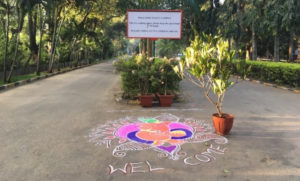 FOUR-HUNDRED PARTICIPANTS FROM TWENTY-THREE COUNTRIES
There were about 400 nationals and organizations from 23 (or 24?) different countries, India accounting for more than two-thirds of the community, the rest being split between countries in the Asia-Pacific region for the most part, Japan in the forefront, together with Nepal, Taiwan and Korea (+Thailand, Indonesia, Australia), and few Americans.
Hong Kong (China) was apparently unable to attend due to denied visas.
We were few Europeans: the two main European communities being Germans and Ukrainians. I was the only representative for France and Greece.

Israël had a huge influence as always in the person of Yaacov Hecht.

No representative from Africa nor the Arabic Peninsula is present. 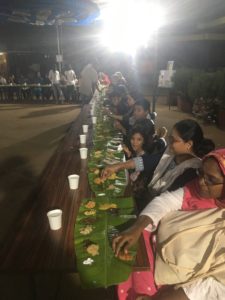 THE DYNAMICS IN ASIA-PACIFIC & INDIA

Asia-Pacific is very dynamic in the field of modern education, with more than 200 democratic schools in Japan alone, in a movement valued by the government (Japan naturally and charismatically took the moderation role in major conferences during this IDEC). Taiwan and Korea (which have reportedly among the freest schools in the world) also occupy a prominent place.

As for India, « the largest democracy on Earth », it shall emerge as a major player in the sphere of Learning innovation. In the land of Gandhi, Buddha, Sri Aurobindo and other world-renowned freedom teachers, experiments are being made far and wide.
DemEd, a relatively new movement here, sparks a lot of interest and curiosity. People are eager to know, active, inquisitive.
For the moment most major conferences were strangely still led by foreigners, or about foreign concepts, but India has obviously much to give to the world and is set to catch up quickly.
The particular demographic situation of the country, its long history in any kind of formal or informal teaching (think about guru -which means teacher, often with the sense of mentor or facilitator), its deep philosophical roots,, and its eternal creativity, give birth to innovative solutions, especially in fields as diverse as Community Learning, solidarity education in slums, cooperative farm schools, education in nature – to name a few.

Relevant examples of this diversity can be found in the Multiversity Alliance (http://www.multiversities.net/) for example, or Marudam Farm School in Tiruwannamalaï (http://www.marudamfarmschool.org/), not to mention the various experiments in Auroville – among so many vibrant examples of Indian dynamism, to reinvent learning in the 21st century. 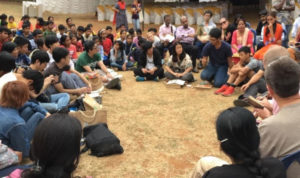 Homeschooling is legal and generally pretty lax (the application of law might vary according to States).

The Ukrainian team, which will organize the IDEC / EUDEC 2019, seems to have overcome its main divisions and reached an arrangement. During the conference, I could see the Stork School team and the Kiev team dance together, play, sing and hug. (It is true that apparently only the most moderate elements of the teams attended this conference.)
If you have not followed the Ukrainian series, all you need to know is that it is question of attribution of the organizing responsibility : the province and the capital disputing legitimacy, inside and outside the country. A solution has been found thanks to a moderator recognized by both parties (viva the moderation circles!;-).

So, we are hopeful of Shanti in Ukraine next year, and a beautiful original conference!
Most of the IDEC 2019 event will take place in Vinnytsia, with an optional 2-day preamble in Kiev. (June 30-July 6, 2019)

Nepal will organise the 2020 IDEC (probably Oct 2020) with an exciting program in the Himalayas ambitioning to attract over a 1000 attendees. Part of the event would be held in the Kathmandu region, with a final leg in the higher mountains.
Canada, Brazil or the United States (Portland Village School) are in the running for 2021.

THE BOTTOM LINE & a personal outlook.

An undoubtedly agreeable, joyful and well-rolling event, which elicited deservingly good feedback. Setting was nice and timely. There was a pleasant balance between talking, and hands-on experiences. Great atmosphere, and so many lovely personalities! ❤️

However, the IDEC community seems set at 4-500 participants, somehow in “closed circuit” and removed from the wide world. After 25 years, our visibility remains close to null, and I wonder if there is a lot of change in the faces of IDEC and even in our ideas, keynotes and routine.
I ask myself how to get out of this comfortable but little influential “bubble” (we mainly preach to the converted) – a feeling that I also felt within the wonderful EUDEC conference in Greece this summer.
As in Crete, the people of Bengalore had no idea of ​​an international conference involving 25 countries taking place in their city – not to mention the rest of India and the world, which remains remarkably ignorant of our activities… (This would be exemplified on my arrival at the airport, when customs officers rolled their eyes why i would come to such a large international conference without a business visa..?Well.. it is not!??)

Again, no independent journalist was present to give a global exposure to our actions to the outer world. Could it be that we are caught in a routine or dreading to do our « coming out »?

Also i am surprised that after so many IDECs & EUDECs, there is yet no systematic organizational tool in place (like billboards for instance)- although the system set in Greece for instance felt brilliant and  efficient. While this surely leaves room for IDEC to reinvent itself every time, I’d think the community will gain by reflecting more on its own practices and copy its best, from one IDEC to another. 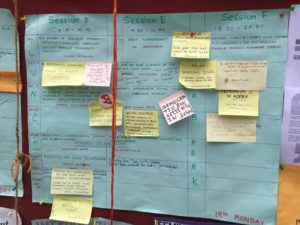 Finally, Africa and Arabia are still not on the map?? I made a suggestion that Egypt could possibly hold an international conference in the future, supporting Nariman Mustafa in Cairo (vote without candidate ?)
My final take is, that the mass of young people present is certainly a major success in this edition. The youth of Asia really pushes the door.
In general, this sojourn in India, beyond the modest conference, convinces me that the dynamism and the creative profusion of Asia is an inextinguishable and indispensable source of inspiration.
And that it is beautiful and essential to continue and try to bring the world closer. (while widening it 😉
Just hoping that this little report can help you forge a global vision of the event, and the situation of the global community of Democratic Education.
Feel free to add your comments, observations, additions and corrections!
Thank you.
Om shanti om 🙂
Lonaïs Jaillais –  sChOoL‍?withOuT frOntiers⛵️ – EUDEC France /international go-between.

& with the kind rearrangement, inspiration and support of Pierre-André