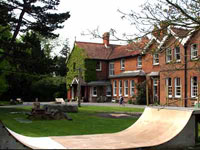 Summerhill School was founded in 1921 at a time when the rights of individuals were less respected than they are today. Children were beaten in most homes at some time or another and discipline was the key work in child rearing. Through its self-government and freedom it has struggled for more than eighty years against pressures to conform, in order to give children the right to decide for themselves. The school is now a thriving democratic community, showing that children learn to be self-confident, tolerant and considerate when they are given space to be themselves.

Summerhill is a community of over a hundred people. About 95 of these are children aged between 5 and 18. The rest are teachers, house parents and other staff. It is situated in a large much loved, Victorian house and grounds, two miles from the east coast of Suffolk.

Most of the children board during the term time, though there are day pupils as well. Usually as the younger ones grow older, they prefer to sleep at school! Summerhill is co-educational and enjoys the diversity of pupils from throughout the world.

There is a wide choice of subjects, up to and above GCSE level. A new timetable is created each term when the older children have “signed-up” for classes, through there is no compulsion to attend.

As well as the structured timetable, there is free access to art, woodwork and computers. There are also open areas where kids not in classes can hang out, amuse themselves, socialise, play games, be creative etc. Adults are not there to create things for the children to do- they need to create things for themselves. So sports, games and other amusements are all generated by the pupils and adults, according to need.

The important freedom at Summerhill is the right to play. All lessons are optional. There is no pressure to conform to adult ideas of growing up, though the community itself has expectation of reasonable conduct from individual. Bullying, vandalism or other anti-social behaviour is dealt with by specially elected ombudsmen, or by the whole community in its daily meetings.

The school is set in twelve acres of garden and woodland with plenty of space for cycling, hut building, tree climbing, bonfires, camping, imaginative games. There is a swimming pool for use in the summer time, a tennis court, playing field, basketball area as well as table tennis indoors.

Summerhill is a happy and caring community that recognise the importance of expressing emotions and learning through feelings. There is a general openness and honesty among the community members. Staff do not use adult authority to impose values and solve problems; these are solved by the individual with the help of friends or ombudsmen or by the community in meetings.

The community atmosphere at the school is very strong. To an extent it must be, wherever 100 people live in close proximity for over half the year, if there is not to be unbearable strain in their relationships. But it is fostered at Summerhill by the fact that all the inhabitants are considered equal members of the community. All are equally entitled to citizenship of the school – teachers, big kids, and little kids alike – and this is reflected in their interactions with each other. There is an ease of manner between equals that cannot exist in a hierarchy, however friendly and informal.

What makes the equality real rather than mere rhetoric is the Meeting. Everyone knows, for instance, that a member of staff has no sanctions against a pupil that the pupil does not have against the member of staff – and that a teacher bringing a case against a pupil is neither more nor less likely to succeed just because of the relative status of the people involved. Here, everyone has the same status.

The result is a strong feeling of solidarity with Summerhill in all its diverse members. And they are diverse: besides the age differences, Summerhill is an international community. Many nations are represented including France, Germany, Holland, Israel, Switzerland, US, Korea and Taiwan; the UK accounts less than half of the pupils.